The Future of Refrigerants

Now that we have discussed the problems involved with a variety of popular refrigerants, as well as the international regulations put in place to reduce the use of these harmful refrigerants, there is still one main question remaining: What’s next for refrigerants? If refrigerants are vital to our daily lives, but there are still planned phase-outs for CFCs, HCFCs, and HFCs, then what is the long-term replacement for these refrigerants, and how should we prepare for this replacing?

Within the last decade, the EPA has set the plan for the implementation of a variety of regulations on refrigerants to curtail their effects on the environment. CFCs were considered a Class I Ozone 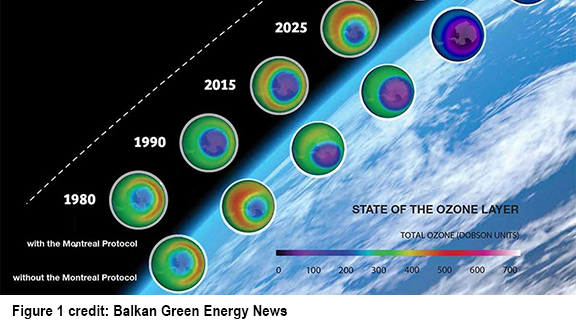 Depleting Substance under the Montreal Protocol, so they were the highest priority. In 1996 they were completely phased out, in terms of newly produced or imported CFCs, though reclaimed and reused CFCs are still accepted. HCFCs are a Class II Ozone Depleting Substance, since they are not as reactive with ozone as CFCs, and in 2010 they were banned, except for continued use in existing equipment, but by 2030 the EPA plans on enforcing the same regulations for all HCFCs as they do CFCs (1). Although a phase out of HFCs is planned through the Kigali Agreement, this would not be enforced in the United States, and they can still be used as a substitute for HCFCS or CFCs, though their environmental impact is just as bad (2). 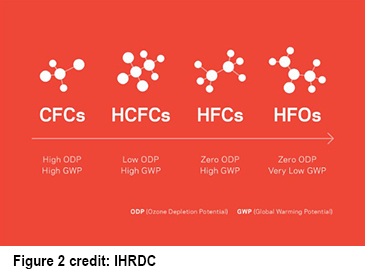 The main type of refrigerant that has potential as the next popular refrigerant are Hydrofluoroolefins (HFOs) because they provide a lower global warming potential and don’t deplete the Ozone. In comparison to some HFCs its global warming potential is over 300 times lower, while it is only 4 times higher than regular carbon dioxide. The European Union has banned some HFCs and started to switch towards HFOs, and many car manufacturers in the United States have now moved towards putting HFOs in their cars (3). There are also a variety of natural refrigerants that, although may not be as efficient as others, have little to no global warming potential and no chlorine to deplete the Ozone. For example, propane, ammonia, and even carbon dioxide make good natural refrigerants that can replace a variety of other refrigerants, such as R404A, a popular HFC blend (4).

There are no policies requiring businesses to stop using HCFCs, so if your systems are using these refrigerants you can continue using them, but you cannot put new HCFCs into the system unless they are reclaimed or recovered. However, the price of these refrigerants will start increasing, so it may be beneficial to change systems or refrigerants. You can either convert your existing system, buy a new one, or continue operating your current system, but you must be extremely watchful for leaks or inefficiencies. Also, in some cases HFOs can fit into existing systems without requiring much retrofitting or mix with other refrigerants to create refrigerants that work in current systems but still vastly reduce the global warming and ozone depletion potential (5).

Refrigerants play a significant but not always noticed role in our lives, from air conditioning to refrigerating food, and they have serious implications on future climates. Although most people can continue to use their current systems with the same refrigerants, changing or replacing existing systems to fit the refrigerants of the future could be beneficial and even cost effective in the long term. If you choose not to change systems or refrigerants, it is extremely important to consider how to prevent refrigerant leaks from this system, as these leaks are how these substances are released into the atmosphere, and to consider the future increase in prices of HCFCs.