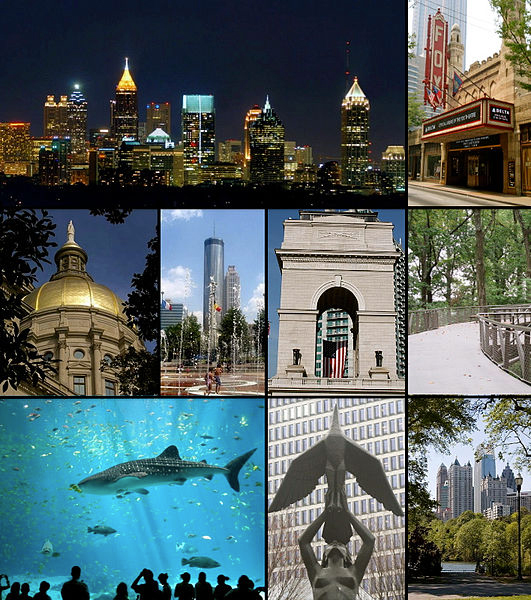 “Is the era of sprawl coming to a close in Atlanta? A recent study produced by The George Washington University ranked Atlanta the eighth (and rising) most walkable city in a study of the 30 largest metro areas in the United States. How can we reconcile these findings with the recent Smart Growth America study that named Atlanta the most sprawling metro area in the United States? Join us for a conversation on shifts in demand for housing and transportation as well as a discussion on what’s in store for Atlanta’s future.”

Southface’s SART this morning took a hard look at the walkability of the city of Atlanta, given the fact that there is directly conflicting evidence for both sides of the issue. The question the moderator posed to frame the discussion for the meeting was: Is Atlanta a walkable city? Or is Atlanta still a post-WWII constructed, commuter/driver city plagued by extensive road and highway systems and urban sprawl. The answer from both panelists: Atlanta is both.

The reason the answer is both has to do with the past and the present. Atlanta has a bad wrap when it comes to urban sprawl; one might say, it is the “poster child.” There are no natural or geographical boundaries or limitation to the city (think N.Y. or San Francisco) and so sprawl is uncontrolled and may seem at times random. This city has been developing predominantly over the past 60+ years and so the change towards a more walkable city is going to be a slow one indeed.

Clearly, though, there is an increased demand for Walkable Urban Places (WalkUP) has been increasing. This is reflected in the Atlanta apartment housing market, as more and more apartment complexes are popping up in and around the city, namely in the Midtown area. Why the sudden influx of residents to Atlanta? Geoff Koski led this discussion into it is not so much an issue of going from Outside The Perimeter (OTP) to Inside The Perimeter (ITP), acronyms commonly used in Atlanta, it has to do more with the changing population. As millennials and other younger generations take to the work force, companies and the housing market is seeing an increased demand from these young professionals to live within the city limits, closer to the hustle and bustle, with amenities and shopping close by as well. This can be directly seen as companies respond to this trend. AT&T has moved many of its Atlanta employees to more centered locations like Buckhead, right north of Midtown, and Deloitte is planning on creating more than 400 jobs for a new software development office to be placed in or around downtown Atlanta as well, according to NPR.

Atlanta has adopted this WalkUP approach in many of its cities, like Suwanee and Decatur. However, without the centeredness and interconnectivity of having an extensive public transportation system and walkable neighborhoods, there seems to a problem with this model, as one attendee of the meeting pointed out. It will be great to have people live in a WalkUP communities in the greater city of Atlanta, however without interconnectivity with transportation between these WalkUPs, there will still be hundreds of thousands commuters on the road.

Additionally, for places like Suwanee which are not even bordering the perimeter of Atlanta, driving into the city for work without adequate public transit is a must. Jared Lombard responded to this valid question with the comment that out of our weeks, workers spend on average about 20% of their time commuting to work in places like Atlanta. More of that time is spent driving to and from places like the doctor’s, the grocery store, to visit a friend, etc. Essentially, if we can increase community connectivity with mixed use residential areas, we can essentially cut down on the amount of cars on the road, if not during commutes, at least for all other trips. This does not seem to apply, though, to those with a suburban taste for living or those with a family that want to be a little outside the city.

So, who is responsible for making our cities more walkable, or for creating WalkUps? In the Suwanee framework, the Suwanee local government acted as the master developers through a RFP process for their urban center. Other cities are allowing the perhaps faster paced private sector develop their WalkUps and urban centers. Zoning and building codes can be a major impediment to any sort of urban development, so regulators and government officials should take a hard look at what makes the most sense in terms of regulating the development of the project.

What makes a good walkable? Both panelists agreed that a mixture of uses, a good network of sidewalks and walking designated area with high pedestrian connectivity and centeredness, adequate alternative transportation options, and density of population. These four main considerations seem to constitute the characteristics needed to ensure a successful WalkUP project.

There was also another acronym flying around the room towards the end of the discussion: Transit Oriented Development (TOD). This is defined as a mixed-use residential and commercial area designed to maximize access to public transport. The national metric for TOD is a 0.5 mile radius. One attendee brought up this great point: a radius does not take into consideration any barriers or impediments to pedestrian traffic. If there is a good TOD/WalkUP in place, this mile radius could be extended to, say, a 3-mile radius, while a lower walkable urban center might really allow for a 0.25 mile radius.

This idea, development around hubs of public transportation, intrinsically encourages public transportation and sustainable growth. Perhaps this model would be more effective in cities of the future in reducing cars on the road and urban sprawl. One of the moderators stated that about 50,000 homes in Atlanta are not exposed to TOD. This is a huge number and a bigger problem, especially since cities like San Francisco and Washington D.C. experience much greater use of their public transit systems, which were first developed and built at the same time as MARTA, Atlanta’s public transportation system.

Is it the responsibility of MARTA or other public transit system to encourage and foster TOD? The simple answer from the panelists: no. While MARTA plays a huge role in TOD, it ultimately is up to each station and neighborhood to maximize their opportunities for TOD applicable to their particular circumstances. This project should ideally be three-pronged, with the U.S. DOT, developers/other stakeholders, and public transit systems like MARTA working together to create the best possible solution. The key though, is that this takes some long-term planning and a commitment over a longer time table to be most successfully accomplished.

Some further questions I have regarding WalkUps, “Walklanta,” and TODs:

Take this survey done by the Atlanta Regional Commission, asking residents what they feel is most important regarding regional planning in their region:

For more information about WalkUPs and urban centers with walkability considerations, click here.

USA Today article on the top 10 walkable cities based on metro areas that have the highest share of office and retail space located in walkable urban areas, defined as neighborhoods, based on the George Washington University School of Business study, click here.

A resource about bicycle safety from Bikemunk, click here.