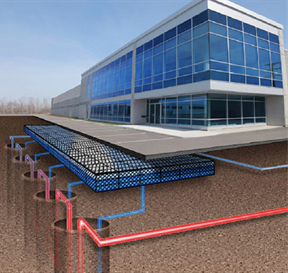 The world as we know it, has relied on the Earth’s fossil fuels for our main source of energy. As the years pass by, we have released significant amounts of carbon emissions into the atmosphere which has led to the Earth’s biggest problem, Climate Change. To counteract against this ongoing issue, there has been a strong push to move towards renewable energy. There are many types of renewable resources such as solar, wind, biomass, and tidal energies. These are all great resources of renewable energy, but often we tend to forget about geothermal power.

Geothermal power has been around for quite some time and is a proven renewable energy source by using pipes buried beneath the surface to take advantage of what we call “Earth Connection”. This “Earth Connection” is a natural phenomenon that occurs approximately 10-150 feet below the Earth’s surface where a constant temperature around 54° degrees lies. With this being said, the buried pipes beneath the surface can serve as a heat exchanger by rejecting heat into the ground or the ground transferring heat into the pipes. This energy exchange can supply ‘free cooling’ or ‘free heating’ depending on the climate region.

The way geothermal heat pumps work with HVAC systems in the summer can be illustrated in the images on the right. Since the temperature below the earth’s surface remains constant year-round, fluid lines of the HVAC system can use the earth as a heat exchanger. During the summer, HVAC systems use cold water or refrigerant to condition the air to a cooler temperature. With this being said, the ground temperature is most likely much cooler than the hot outside air. So, the pipes beneath the surface carrying the warmer fluid are able to reject their heat into the earth’s ground and then send a much cooler fluid back which is then used to condition the space.

Geothermal heat pumps are not only used for cooling but can also be used for heating as well. Most of the time geothermal heat pumps work in conjunction with fan coil units to provide hot air for a building. As fans transfer the hot air emitted off the coil, the fluid begins to lose heat and needs to remain warm to provide for the heating demand. The geothermal system takes advantage of the “Earth Connection” as mentioned earlier. Most of the time during the winter months, the ground is much warmer than the cold outside air. The pipes lying underneath the earth’s surface carrying the fluid will take in the heat provided from the ground. The temperature of the fluid moving through the geothermal system is most likely not warm enough to heat a space, but this process is able to save energy and use less work than a traditional heating system. 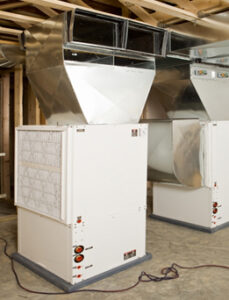 Since geothermal power is considered a source of renewable energy, there are many benefits that can lead to energy savings and reduction of greenhouse gas emissions. A geothermal heat pump is very environmentally friendly in comparison to traditional heat pumps and exchangers. Without having to use as much electricity or any natural gas, the geothermal system can remain turned on without having to use significant amounts of energy. The “Earth Connection” in which the pipes are buried beneath will always maintain the 50°-60° range of temperature no matter what season or day it is. Since this renewable energy source is buried beneath the earth’s surface and if it is installed properly, there is hardly any maintenance that would need to be performed. The only maintenance that is really required with the geothermal heat pumps is refrigerant checks and recharges.

As the United States and countries across the world continue to battle against climate change, we will begin to rely more on renewable energy sources to reduce carbon emissions and use less fossil fuels. Solar and wind power are frequently seen across our nation, but as we advance into the future, we cannot only rely on these two types of renewable energy. New technologies and energy sources, like geothermal power, will have to be found and implemented more often than ever if we want to put a pause on climate change forever.