Power Up! for a Plasma Future 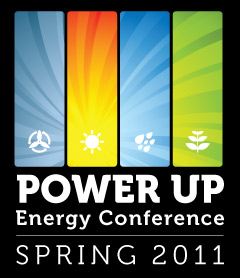 After two days in sunny Florida, I just returned from the Power Up Energy Expo on the Gulf Coast. The atmosphere was optimistic and I heard  a lot of big ideas with deep green return. The conference was hosted by The Gulf Cost Energy Network, a non-profit organization who develops education outreach programs to promote policies that strengthen energy and water conservation practices, and fosters alternative forms of energy and sustainable construction. Their team worked hard to provide dozens of thoughtful speakers from the US and Canada, so it surprised most of us when a handful of speakers were delayed or canceled as a ripple effect of Washington’s indecision over the federal budget. Several government employees were blocked from non-essential travel. Despite a few missing speakers, there were truly outstanding local environmental initiatives to showcase.

The most far-out technology presented at the conference was the plasma waste to energy plant (ie. Trash incinerator) at Eglin Air Force Base. The federal government may not have a carefully planned budget, but luckily the military is willing to pilot cutting edge technology that a) eliminates the burden on landfills and b) produces energy! This one sophisticated piece of technology turns the problem of waste management into a solution of clean energy generation. The technology comes from  PyroGenesis out of Canada-this will be a company to watch in the future. The tag line on their website states, “we don’t think outside the box, we redefine the box.”

In the session I presented on green jobs, I learned that North Florida is also home to a wind turbine manufacturer. How would you like a green job in paradise? Quick lesson on wind power, another speaker explained how two blades are better than three for improved efficiency and reduced noise, based on how the system handles lateral loads. In my session I profiled a few people and companies that I work with to show real world examples of green jobs people have today, because it’s not all solar and wind power manufacturing. Most of the time it’s just taking a traditional industry, like landscaping or cleaning, and improving their practices to be more environmentally responsible. Without digging too deep I even uncovered two local Atlanta recipients of federal grant money from the  American Reinvestment and Recovery Act of 2009. The Georgia World Congress Center will be investing in local green jobs when they complete a multi-million dollar lighting retrofit later this year. By replacing older metal halide fixtures with newer induction lamps, the 3.9 million square foot facility can reduce its lighting loads in half. Why don’t they use fluorescent T5 lamps that we typically hear about? It’s true T5 has a slightly higher efficiency than induction lamps, but the GWCC’s sustainability coordinator did his homework. For spaces with high ceilings that require high density outputs, like a convention center, induction lamps have benefits over the T5s, as well as proven performance in similar applications on the west coast.  The second example of investment in green jobs in Atlanta is at Southface’s SWEET Center (Southeast Weatherization and Energy Efficiency Training). Southface also received federal grant money and matched it with their own funds to provide practical, hands-on learning opportunities in up-to-date weatherization techniques and testing protocols including blower door testing, air sealing and duct blaster testing, and installing insulation. This program primarily serves low-income home owners, but there are a few alternatives. If you own a home in the City of Atlanta, be sure to check out the SHINE weatherization rebate program.

I’m closing with an idea from the Power Up conference that sounds almost too good to be true-maybe that’s why it has not been built yet-a rail system with byproducts of energy and water. Sure we’ve all heard about high-speed magnetic rail, but Interstate Traveler [www.interstatetraveler.us] has designed a Hydrogen Super Highway, a bon-a-fide ‘ecotopia.’ Envisioned next to existing automobile highways, the rail is elevated and integrates solar energy generation with a central utility conduit to solve the problem of outdated or underserved public utilities. The hydrogen power process results in surplus h2o that can be used to grow food crops. It was during this session I first heard the term ‘vulture capitol.’ Meaning investors whom would rather buy the idea and attach their name to it, than help the creator realize it’s true potential. All politics aside, I’m glad that people are still dreaming big and not afraid to share their versions of ecotopia. And that’s what I saw at Power Up, intelligent, creative individuals turning their dreams into a sustainable reality.