LEED at the Source of the Mississippi

Asa Posner, Senior Sustainability Consultant with SIG’s Minneapolis office, recently took a weekend trip to Itasca State Park, just south of Bemidji, Minnesota. He had a fun-filled weekend full of hiking, biking, and was taken aback by the amazing fall colors northern Minnesota has to offer this time of year. Itasca State Park is famously known for containing the “headwaters of the Mississippi” – the official beginning of the river as it flows gently out of Lake Itasca. Picking up various tributaries, volume, and speed along the way, the river eventually spills out into the Gulf of Mexico 2,552 miles downstream.

Within the park resides the Itasca Campus Center, a new research laboratory and classroom building for the University of Minnesota’s College of Biological Sciences department. Asa was able to tour the building during its grand opening weekend and review the various sustainable building strategies that will lead to its eventual LEED certification (either Gold or Platinum) in the coming weeks. The approximately 12,000 square foot building was funded by a $4.1 million capital bonding bill proposed by Minnesota governor Mark Dayton and an additional $2 million from donors and the College of Biological Sciences itself. It provides technology-enabled laboratories, classrooms and offices, a 150-person multi-purpose room, a library/computer room, and three administrative offices. 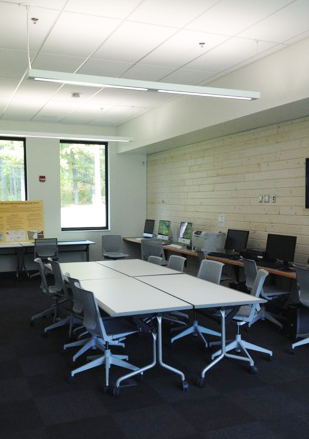 Sustainability was a key theme in the construction of this building. A geothermal system was selected in order to take advantage of the relatively constant temperature within the earth – vertical wells were drilled for heating and cooling that utilize the earth as a heat source (winter heating) or as a heat sink (discharging heat for cooling in summer). Additional sustainability strategies include an underfloor air distribution system, substantial daylighting and subsequent lighting power density reduction, and a 32 kW solar array on the roof.