Discussion around the sustainability of the built environment leads to a complicated question of responsibility. On whom does it fall to lead communities in the direction of a more green urban landscape? From building owners to tenants, whose duty is it to set the standard of sustainability in the community? In the city of Boulder, Colorado, the Boulder City Council decided to play an integral role in a push to make the buildings in their hometown more energy efficient through the adoption of the Boulder Building Performance Ordinance. 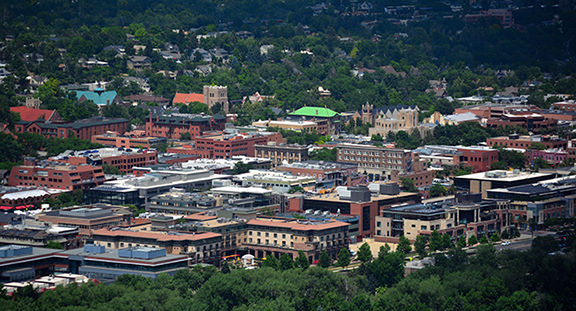 Introduced in 2015, the ordinance took action to make the reduction of energy consumption mandatory instead of voluntary for commercial and industrial privately owned buildings as well as city-owned buildings. The piece of legislation requires qualifying buildings to:

This impactful legislation was drafted in response to the relationship the City Council saw between the operation of Boulder’s buildings and the city’s greenhouse gas emissions. In 2015, the year the Ordinance was adopted, 53% of Boulder’s total greenhouse gas emissions stemmed from commercial and industrial buildings. After reviewing the success of cities with similar commercial energy requirements, the council decided to test the impact this type of policy could have on their community.

The driving force behind the Boulder Building Performance Ordinance is the idea that when buildings are asked to rate their energy performance it results in energy savings, typically between 2-3%. The positive impact the local government anticipated had results ranging from economic to educational in nature. Increased energy efficiency was predicted to save building owners and tenants money while improving the commercial building stock in the city of Boulder. By asking buildings to analyze their energy data, the Council hoped the population would grow more educated on energy performance and how to understand and manage energy use.

The Ordinance has now been in effect for two years and the data suggests that the policy has had a positive impact on the city’s urban landscape. When comparing the Boulder Building Performance Report from years 2015/2016 to 2017/2018 along with the most recent building performance map to the right, a few key statistics display the success the local government has had. The number of buildings subject to mandatory reporting has grown from 165 to 324, representing nearly 29 million square feet. The most recent data informs that consistently reporting buildings have reduced their site energy use by 1% over the past three years and 3% over the last year of rating and reporting.

Despite the success of the Building Performance Ordinance, Boulder has further committed to playing a positive role in combating climate change. In 2016, the City of Boulder’s Climate Commitment goal was adopted, an attempt to achieve an 80% reduction in community greenhouse gas emissions by 2050. If you have an interest in how your home or workspace can be more sustainable and join this movement, please visit our website! Sustainable Investment Group (SIG) provides Leadership in Energy and Environmental Design (LEED) consulting, LEED Exam Prep Training, Green Building Consulting and Technical Services from our offices in Atlanta, GA; Boulder, CO; Minneapolis, MN: New York, NY and San Francisco, CA.