After the pollen of Spring’s first blooms settle, another rite of Spring visits the streets – Bike to Work Day.  If you’ve ever thought about reducing your personal carbon footprint with a human-powered commute, May is the month. You will be supported by fellow cyclists and local clubs or advocacy groups providing energizer stations, happy hours, and other creative amenities for cyclists. Recent investments in bicycle infrastructure have helped cycling become a safer and more enjoyable commute alternative. 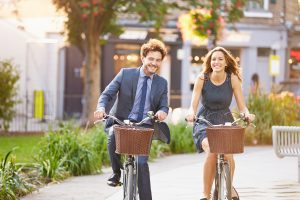 Drive-thru eaters and traffic groomers are challenged to take your hands off the steering wheel and onto some handlebars. What is the worst that could happen?

-You may become addicted to cycling!

For 60 years, The League of American Cyclists have celebrated national bike month in May, spotlighting national Bike to Work Day 2016 on Friday May 20th. Their data shows that in the past ten years, trips made by bicycle have grown exponentially. More bikes on the streets adds visibility, slows cars, and overall makes it safer and healthier for everyone sharing circulation networks. Just imagine, fewer cars yields fewer emissions polluting the air for pedestrians.

On bike to work day, commuters are encouraged to burn calories rather that fossil fuels. Google your city to find local events and resources. Here are a few highlights of the neighborhoods our SIG team calls home.

Sacrificing your air conditioning to reduce a few carbon emissions may not motivate everyone, but some municipalities see huge value in promoting cycling as a way to prevent emission growth. The country leading global investment in bicycle infrastructure is the country of Norway who announced this year that they will invest nearly one billion dollars to create bike highways for commuters to safely reach outer suburbs from the city center. (http://www.citylab.com/cityfixer/2016/03/norway-bike-highways-billion-dollars/472059/)